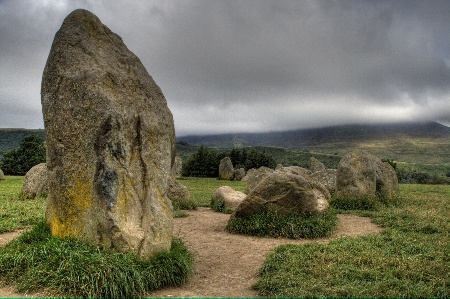 UPDATE: Of course, the theme you now see is no longer the one described in this post. Plus ça change...

I got bored. Over the next couple of weeks I need to create a couple of other websites (essentially single-pagers for charity events) and so I wanted to practice CSS again. This new theme you see (at least that's so, all you readers of RSS, if you went to the website) I'm calling Castlerigg.

Last September my wife and I stayed in the Lake District, on Lake Windermere, for a few days. Beautiful weather, at least until the last day when we left; and we drove out of the Lakes via Castlerigg. It's famous for its prehistoric stone circle (here's the Google satellite view) and because it was such a cloudy, chilly day, there was virtually no one around and I took some great photos of it, photos that seemed to emphasize its isolation and antiquity.

A couple of minutes with one of Adobe Lightroom's presets gave me the picture I've made as the header for all my pages.

Other than that: Adobe's kuler site provided the colors (I chose the faded green of the grass as the base color, and then chose "Triad"). Adobe Illustrator produced the quotation marks you'll see on blockquotes. This web site produced the two gradient images I use at the top of items (it was easier to produce what I wanted than Photoshop).

And that's about it.