Setting Up My Sony Clié 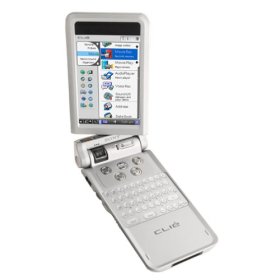 In which your intrepid traveller through life comes to recognize that saving money on cheapo electronic gear will bite you in the butt eventually. On the way he decides to list the software he finds essential on a Sony Clié NX70V, ready "for the next time".

On my last visit to Russia, a couple of things happened that, in conjunction, meant I was without my music for the majority of the trip. And, let me tell you, that's not good. I exhausted the one and only classical music feed on the Delta flight after one hour (why, oh why, don't they make it a longer programme?) and had to listen to it a few times over.

OK, the first thing. I have an iPod Shuffle. Small, very lightweight, no screen to worry about scratching/cracking, and I use it in the car too, plugged into my stereo. I'd bought a third party power adapter that provides a USB outlet and a USB cable for the Shuffle. The final night before leaving Russia, I set iTunes to replenish the Shuffle with some new music and went to bed, leaving it to continue. The next morning, a weird error message, but I ignored it, shut it all down, and went to get the taxi to the airport.

Well, it seems that it only copied 10 songs before the error. I was on the plane, eating the "chicken or pasta" dinner (it's always chicken or pasta these days -- in our quest to save a friggin' measly $25 on the airfare, the US airlines have reduced the service they give to the absolute bare minimum: choice of two meals, one of which is the vegetarian, and no free wine or beer or cocktails; and let me stop here before I start whining about the dreadful, viciously acid, red wine that Delta serves for a magisterial $5, not that United's is much better), when I suddenly realized that I'd heard this track not half- an-hour ago.

In fact I must have heard it a couple of times already. I do have lots of remixes of songs, so I think I'd just assumed that iTunes' random selection (which has to be the worst implementation of a random routine ever) had selected several remixes of the same tune to upload. Of course, without a screen, I was reduced to skipping tracks and counting, but, sure enough, there were only 10 tracks on the player.

(Aside: it wasn't until my recent trip to England that I realized it was the third-party cable that was at fault. With the official Apple dock I could load and recharge the Shuffle with no problems whatsoever. With this cable, iTunes would lose connection with the Shuffle after a little while. Needless to say the cable is now under several feet of other garbage in the local landfill.)

Heh, no problemo, I had my trusty Sony Clié NX70V. Fabulous PDA running Palm OS 5.0, and with a great little audio player that even had a remote control. I knew I had about half a gig of music on the memory stick, and, even better, I had an external battery pack for it that took AA batteries and I had some extra batteries in my bag. I was set for the rest of the trip.

After a while the player shut down for lack of juice and so I plugged in the external battery pack. The machine crashed, requiring a soft reset. It crashed again after resetting. Finally it crashed so hard I had to do a hard reset. And then I remembered. To get a Memory Stick Duo to work with this Clié I'd had to update the driver. A hard rest would wipe out that driver (the Clié has no hard disk, just memory). I was without music again.

When I got home I just put the Clié aside. It needed a complete reinstallation (and before that, an installation of the Palmtop desktop on my new machine), and I couldn't be bothered with all that at the time.

Eventually, of course, the time came when I needed the calculator on the Clié and it wasn't there. Not the rinky-dink calculator that comes with the Palm OS, but a rather more complete scientific calculator called MathU Pro, software provided by a small company in the North-West called Creative Creek.

A calculator is a calculator is a calculator, I hear you say, what's so special about MathU Pro? For a start, it's an RPN calculator that emulates the design and functionality of Hewlett-Packard calculators from the early days. Yes, it does calculations using Reverse Polish Notation. If you've never used RPN and do a lot of calculations, you're in for a treat. After a small learning curve to forget the awkward algebraic entry of calculations you're used to, you'll find yourself doing calculations much quicker. You just work your way through the calculations from the inside out, never worrying about parentheses, using the built-in stack to hold temporary subtotals. There's no equals sign, no operator precedence either. It's great.

And then again, MathU Pro works with the full 360*240 screen on the Clié. It has buttons you can "press" with your fingers, no need to get out the stylus. Even better, it has a landscape mode that emulates the look of the Voyager series of HP calculators. And it's keystroke programmable too, with a debugger in case you didn't get it right in the first place. And, and, and.

I've been using this calculator for, what, five years now? And now I missed it. I've recently bought the new HP 35S calculator, a very nice RPN scientific calculator that, unfortunately, needs programming to do Time Value of Money (TVM) calculations. And that's what I needed MathU Pro for.

So a couple of nights ago I decided to spend the evening reinstalling the Clié. I'm putting it all down here so that I can find it next time, if there is a next time. If (a) Apple open up the iPhone officially so that third parties can write software for it, and (b) Creative Creek port MathU Pro to it, I'm so getting one since everything I use in a mobile will be on one device. Anyway, without further ado...

(Note: the prices I quote are as of September 2007. Many of these I bought ages ago, probably at a cheaper price. Note also that some companies have since gone out of business.)

I assume the Clié is fresh, and has had a hard reset with all memory cleared.

Install Palm Desktop for the Clié on your PC. (If you don't have the CD, go to Sony's website, click on Service & Support, and follow the links, entering the model number where necessary.) You need to do this so that you have the HotSync Manager so that you can install stuff onto the Clié.

Install the external keyboard driver. Comes on a CD with the foldable keyboard. I have both an official Sony one and a cheaper, lighter, smaller Fellowes Stowaway XT. The latter I bought brand new from eBay for $10 and it works extremely well.

Install JackFlash ($20). This is an application that copies programs to Flash memory. The Clié comes with 16MB of RAM, of which 8MB is flash memory. You can't use this flash memory normally, so in effect you only have 8MB of RAM to use for your apps. If you transfer these apps with JackFlash to flash memory you release that much normal RAM up for data files, etc. The apps run just fine from flash memory. (Note: I bought this program the last time I fiddled with the Clié's setup in early 2006. It seems that Brayder Technologies, Inc., are now out of business since I see their website is now a pretty ugly p0rn gateway.)

Install Ultrasoft Money ($40). This is an application on the PDA that mimics Microsoft Money. In a HotSync it transfers the last three months of transactions to your device so that you can access your accounts when out and about with the PDA. Transactions you enter on the PDA get transferred back to MS Money the next time you sync, and so on. I've never used this side of the application, preferring to use the data on the Clié as read-only.

Install Red Mercury's Acid Solitaire ($10). An awesome inexpensive solitaire game for the Palm OS and now for Windows. It's way, way better than the one you get as part of Windows.

Install SyncTime ($6). This is an application that syncs your PDA with your PC at every HotSync. Invaluable, since the Clié seems to drift relatively quickly.

Install Documents to Go ($50). Essentially Word, Excel and PowerPoint on a Palm. Used to be that this product did better conversions of documents to and from the mobile device than Windows Mobile did. It's great to use if you have a foldable keyboard. For Palm OS 5, you need version 8.0. Sometimes a cut-down version was given away for free with the device, and I upgraded mine to the full Premium version years ago.

Install Password Plus ($30). Stores all my passwords and login information, comes with program for both Windows and the Clié. I've used this for years.

Install BDicty ($10 for the reader, $15 for the dictionary). A very good dictionary and reader.

Install Landscape for Clié ($20). A driver to enable landscape mode on the NX70V; for me it's for MathUPro primarily.

Install BigClock (Free). World times, alarm clock with multiple alarms. I use this to wake me up on travels.

In the old days, I also used to install Beyond Contacts, also from DataViz. It's, quote, the closest thing to Outlook on the Palm, unquote, but I never really used it all that much.

This time around I also investigated seeing whether there was a driver for the CompactFlash slot that worked with memory cards, since the one on the NX70V only works with the WiFi CF card, also from Sony. Nothing from Sony, and on googling the only commercial one it seems was from a company called EruWare back in 2003. Like Brayder, they no longer exist. So, some spelunking was needed to see if someone else had written one or done something to help. Using PalmGear I found Athena America who have a CompactFlash driver (Athena CF Enabler $27). Lo and behold, it appears to be the old EruWare product, presumably bought when that company went under. Although the registration process is slightly arcane, it installed and works just fine. I can play audio from the CompactFlash card (I have a couple of smaller ones from my camera) which is essentially all I wanted it for.