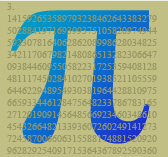 A couple of evenings ago, my wife was reading an article about a federal prosecutor, when she suddenly exclaimed "How many digits of π do you know? Because this lawyer knows 500 digits." I had to admit that I'd only memorized π to eight decimal places, 3.14159265, but I immediately jumped in with "I know how to write a program that can print out thousands of digits of π." So she threw down the gauntlet.

OK, so my boast was a bit of a stretch: although I'd never written such a program before, I did remember the basics, something about Taylor series.

Back in 1706, John Machin, then a professor of astronomy at Gresham College in London, devised a formula for π that would be used for hundreds of years afterwards to calculate ever more digits of π (he himself used it to calculate 100 decimals of π):

Doesn't look like much improvement — you now have the problem of calculating two arctan values instead — but there's a celebrated rapidly converging infinite Taylor series for doing just that:

OK, now that we have enough mathematics, we have to think about devising a program to calculate π. The first thing to note is that we can't use any of the primitive types in C#: they just don't have enough precision (the double type, for example, only has 15 significant digits, and we want to calculate, say, 10000). We need a large precision number library, but there's nothing like that in the .NET Framework, and so the first thing we'll have to do is write a BigNumber class.

If you look at the series for arctan, you'll see that you can use a shortcut. Each term in the series consists of a power-of-x, divided by some constant. The powers-of-x increase by taking the previous power-of-x and multiplying it by x2. Since we shall be using integer reciprocals, we can see that to get the next power of x, we merely divide by the square of that integer (in our case, 5 or 239). In other words, our BigNumber class doesn't have to have a "divide this BigNumber by another BigNumber" method — at which point I would have discretely dropped the entire project, thank you very much — but can make do with a "divide by an integer" method instead. This, to be utterly frank, is a much easier proposition. And we can use it for the divide-by-a-constant parts of each term as well.

The BigNumber class will need addition and subtraction too, and also a multiply by an integer operation.

What we'll do is make our BigNumber class use a fixed point representation. The "digits" in our representation are full unsigned 32-bit integers (we'll be doing calculations base 4,294,967,296, if you like). There will be one "digit" before the radix point, and some large number of digits after the radix point. We shall in due course have to write a conversion routine to get our answer base 4,294,967,296 into our usual base 10.

There is one more issue we have to solve first. We'd like to specify the maximum number of decimal digits to our BigNumber class in order to size it, rather than the number of digits base 4,294,967,296. Since that's 232, which is just a bit more than 109.6 we can divide the maximum number of decimal digits by 9.6 (or multiply by .104) to get the number of digits base 232. Add one for the digits before the decimal point, plus one for rounding errors in the conversion to base 10, and we should be good to go. So, for example, to get 10000 digits of π after the decimal point, we would need to allocate an array of 1042 UInt32 integers.

First up then is the constructor.

Next we'll write the Add() method for adding two BigNumbers. Just in case, we'll make sure that the two numbers have the same size, and they're not the same object (we'll follow this check with other methods).

In essence the code merely does the same kind of addition we learned at school: add up the digits from right to left, and remember to take care of the carry as we do so. It's complicated a little bit in that the addition of the digits has to be done in 64-bit arithmetic, but other than that, nothing too spectacular.

Next is subtraction. Here we assume that the value being subtracted is less than the one being subtracted from. In other words, I'm assuming that there are no negative numbers; yet again, a simplifying tactic since this is not going to be a universal BigNumber class useful for a whole bunch of calculations, just one that's good for calculating π (and maybe other simple Taylor series, like calculating e).

Again, this is standard school-level subtraction. To ensure no negative numbers are calculated as I go through, I assume that a borrow is going to be needed with each digit position. I do the subtraction of each digit, and then check to see if the borrow actually was used or not.

We now visit multiplication by an integer.

Like before, nothing too new here: it's just like multiplying an ordinary decimal number by 7, say. We work from the right to the left using 64-bit arithmetic, making sure we calculate the carry with every digit multiplication. We don't worry about overflow, although it's simple to spot, since, again, we're limiting this to our very narrow scenario.

Division by an integer, next.

Here we work from the left to the right, dividing each 32-bit digit by the divisor, and working out the carry using the mod operator. In essence, and I repeat myself, much like we learned long division at school.

Now we have the basic operations written on a BigNumber, we can now write a routine to print such a number in decimal.

We're all set now for the pièce de résistance: calculating the arctan of a number, where that number is assumed to be the reciprocal of an integer.

We need two temporary BigNumbers here, one to keep track of the powers-of-x parts, X, and the other to calculate each term of the series, term. We start off by calculating the first term of the series and putting it into X. We can then square the integer reciprocal. And then we're off into the loop. We divide the powers-of-x part by the square of the reciprocal, and assign it to the term temporary. We then divide term by the new divisor (this increments by 2 each time through the loop to count off the odd numbers) and then we either add or subtract this new term of the series into our running total, alternating each time through the loop. The loop ends once the new value for term has underflowed and is zero.

Finally, fanfare, we can write the actual calculation of π.

(Here PrintAsTable() produces a very stylized output of the value as a grid of 10 digit blocks.) The output for the first 1000 decimal digits of π is:

(I am indebted to J.W. Stumpel and his page on calculating π, especially his simple C program, for this article.)