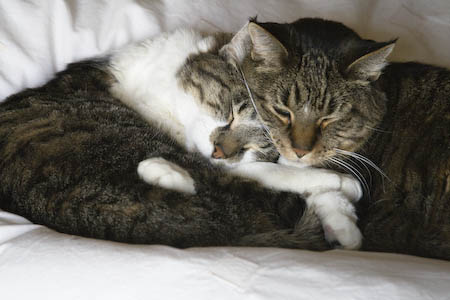 Once upon a time there was a tabby cat called Orpheus. His owners loved him like you wouldn't believe or even have thought possible. At 6pm today, more or less, he died. That's him on the right.

Over the past two weeks, Orpheus' vital functions essentially gave up. He had Chronic Renal Failure, he had hyperthyroidism, that much we knew. But suddenly, just when the therapies he was getting seemed to be working, he was diagnosed with potassium deficiency (bad news for cats apparently), anemia (he wasn't making new red blood cells), and over the past couple of days what seemed to be liver failure. He'd stopped eating completely, and cats' metabolisms being what they are, started to use up his fat and protein stores and was wasting away.

On Tuesday evening, we took him to the emergency vet. Just like the emergency room at your local hospital, but with worried owners in the waiting room and weird cries and yelps from the operating theater behind reception. He was breathing heavily, hadn't eaten for sure for at least three days, and just wouldn't move. We were there for nearly four hours and the diagnosis wasn't good. He was put in an oxygen cage with an IV to try and rehydrate him and to help him breathe better. His skin was tinged yellow, the jaundiced look being a symptom of the liver problem.

The next day, back at his normal vets', he was force fed once an hour to try and get him to digest food again. The IV was kept on continually, with extra potassium chloride and dextrose to help him. He was put in an oxygen cage occasionally.

We went to see him in the evening. He was weak but he recognized us. we stayed with him until the vets' closed.

Today, more of the same, but it was becoming more and more obvious that Orpheus wasn't pulling through. The force feeding wasn't working all the time, he just wasn't swallowing. They didn't want to anesthetize him to insert a feeding tube directly to the stomach, because they were afraid he just wouldn't wake up.

At 4pm, the vet phoned me. I was just about to go into Whole Foods to buy food for some guests coming round in the evening. He told me the news, and said the prognosis just wasn't good at all and that we should consider saying goodbye.

I went round to the vets' immediately. Donna abandoned work and came as quickly as possible.

When I crouched next to the oxygen cage where he was and stroked him and talked to him, Orpheus slowly recognized me and meowed. It was not the first time I cried that afternoon. It seemed that he'd been very unresponsive all day, and it was only when I, and half an hour later when Donna made it in, that he meowed and struggled to move. Put simply, he knew it was us.

We stayed with him for about an hour, talking to him and stroking him, and then signalled that the vet should put him to sleep. He had an anaesthetic first to put him to sleep, and then they would have put the euthanasia drug into the catheter he had into his front leg. Donna held him as he fell asleep and then we put him into his cage so that they could complete the operation. We left before they did.

Orpheus was just over 12 years old. We got him and Eurydice on July 4th 1996, so he was just short of his 12th anniversary with us.

This evening, we've been remembering him. How he would try and eat gift ribbon and throw it up. How he'd sleep on our pillows at night, and considering he was a 23 pound cat that was difficult. How he'd watch Donna get ready on the morning, sitting on the bathroom cabinet. How he'd fetch a hair tie if I threw it (I haven't been able to train our other two to fetch). How he'd race out of the front door if you opened it (our cats are indoor cats). How he'd wash his two brothers, and also lick our noses if we were in bed. How his tail would swoosh side to side like a Bob Fosse musical number. How he'd be waiting for us when we got back from going out. How he'd open the shower door with a thump, sometimes at 4 in the morning. How he'd use Aristaeus as a pillow. How he lay down on top of my old 17-inch monitor when I was writing the threading chapter in Using Delphi 3: Special Edition, with his front paw languidly flopping down just where I was typing, so I dedicated the chapter to him. How he'd come down and show off in front of guests. How he'd try and climb the Christmas tree every year and bend the branches 'til they almost broke. How he'd get on your back if you were lying on the floor reading. How he was such a good- tempered cat you could rub his tummy. All this was Orpheus, and so much more.

Once upon a time there was a wonderful tabby cat called Orpheus. And now he's gone and our lives are emptier for it.